Check Out How Much That Second Fridge Is Costing You 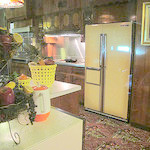 If the refrigerator humming away in your garage or basement is Avocado Green, Coppertone or Harvest old, it was probably built in the 1960s or 1970s and is sucking hundreds of dollars in electrical costs from your bank account each year, according to GE.

The average yearly electrical consumption of a 1972 refrigerator is 2,000 kilowatt-hours, which adds up to about $270 every year. Today’s models cost about $53 a year to run.

Even a fridge built in the 1990s costs far more to operate than current models. Replacing a 1999 fridge with a new ENERGY STAR model will save you about $55 a year.

You can calculate the payback of recycling your old fridge and replacing it with a smaller fridge using ENERGY STAR’s Refrigerator Retirement Savings Calculator to estimate your savings.

There are several good reasons to replace your old fridge with a smaller, more energy-efficient model:

Second fridges are seldom full, meaning that a smaller refrigerator will do just as well and take up less floor space.

* A new fridge uses less electricity than an older refrigerator, saving you money and improving the environment by helping to reduce greenhouse gases.

* A non-dispensing fridge uses less electricity than a model with an ice-maker or water dispenser.

* A top-freezer model uses 10 percent to 25 percent less electricity than a side-by-side model.
GE’s Decatur, Ala., plant is manufacturing energy-efficient 15-, 16- and 18-cubic-foot top-freezer selling for $550 to $600. They’re refrigerators suited for smaller homes or as second refrigerators in garages or basements.