Did This Winter Wreck Your Roof? 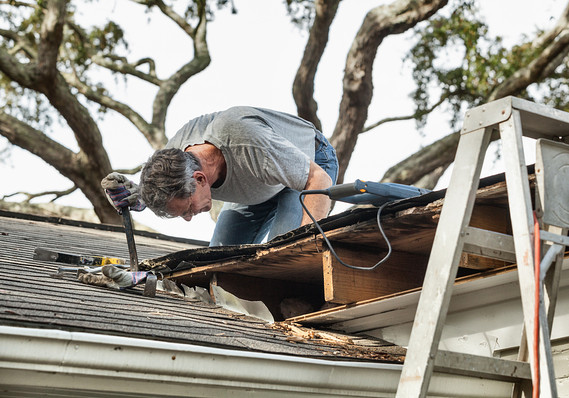 Between heavy snowfall and extremely low temperatures, this winter has been tough on many Americans. It’s also been tough on America’s roofs.

Roofing contractors are expecting an uptick in business as the weather warms up and people start to notice problems, said Tom Bollnow, senior director of technical services for the National Roofing Contractors Association. In the Chicago area, where he’s based, it was one of the coldest winters people can remember — and one of the snowiest, too.

Often, damage from winter storms is found around pipes, skylights and chimneys — any part that penetrates the roof, Bollnow said. Ice and snow can easily build up around these, melting during the daytime and freezing at night. “These constant freeze-thaw cycles can cause damage to the roof materials and the accessory materials,” he said.

Other problem spots are valleys, where two slopes intersect on the roof, such as around dormers, where ice and snow can build up. Ice dams can cause problems with gutters and shingles, he said.

“The first call is if there’s a specific leak. The second call may be that the snow melted and they noticed shingles all over their front lawn,” Cazeault said.

Sometimes the damage comes from people trying to clear their roofs of the ice dams, or removing the snow itself. “Even though they come out on the news and say you should clear your roofs,” Cazeault said, “sometimes people do more damage than they realize.” If the roof was old or brittle to begin with, the wrong move could create a bigger problem.

But it’s more than just the harsh winter that will drum up business, he added. Over the past several years, homeowners have put off doing work on their roofs, because they didn’t feel confident about the economy, he said. Last year, many were only making roof repairs because their insurance company said they’d have their policy canceled unless they redid their roof, Cazeault said.

This winter, however, may have pushed procrastinators over the edge, he said.

“I can’t sit here and tell you we’re going to have the year of years. But I think spring will be a busy one,” Cazeault said.

On warmer days, when the temperature is in the 30s and 40s, M&M Home Remodeling Services, based in Crete, Ill., already has been getting an influx of calls, said Nick Yadron, president of the company.

If winter did a number on your roof, consider the following:

Stay off the roof.

“Some people are capable, and they do some of their own checking on the exterior of their home. But we don’t encourage homeowners to go up on their roof,” Bollnow said. It can be a dangerous task, unless you follow certain safety guidelines, so homeowners are often better hiring a professional to do the check.

Beware of unsolicited offers to fix your roof problems. After big storms or hail events, for instance, sometimes scammers will try to squeeze some money out of unsuspecting homeowners. To find a reputable company, gather recommendations and interview a few contractors before giving them the job. In many states and local jurisdictions, roofers are required to be licensed and bonded; always check the status of their license and insurance. While you’re at it, look up their reputation through the Better Business Bureau. The NRCA offers more advice on choosing a contractor on its website.

Inspections may be Free.

It’s impossible to speak for every company, but both J.T. Cazeault & Sons and M&M Home Remodeling Services will do free roof inspections.

Look on the inside, too.

Yadron also likes to take a look in the attic for visible signs of water, in addition to the exterior inspection. This also provides an opportunity to look at ventilation and insulation in the attic, he said.

Typically, roof repairs can start around $325 and can go as high as $1,000, Yadron said. Cazeault’s estimate for basic repairs, such as when shingles are blown off: Anywhere from $200 to $500. Remember, these are just ballpark estimates.

But replacements are much more expensive.

A replacement on a typical asphalt shingle roof often costs about $3 to $4 per square foot—depending on how many layers of roof are already on there, Yadron said. “You’re not supposed to have more than two,” he said, but he’s run across homes with three or four layers. The more layers, the more labor intensive the job will be and the more disposal fees you’ll be subject to. Cazeault estimates the cost to be about $4.50 a square foot, adding that a new roof on an average three-bedroom home costs between $10,000 and $15,000.