The Anatomy of A House Painting Plus

The Anatomy of A House Painting Plus

Do you like to sleep late? Right…who doesn’t? Do you like to shower in privacy or for that matter get dressed without an audience? Of course you do, who doesn’t? You must be wondering what on earth I am talking about. Sit back and take a look at the photos…

My house is 120 years old, had knob and tube wiring that was removed followed by major hole repair (from wires being pulled) with interior and exterior painting. When the electricians told me my walls were hot and it was only a matter of time before my house burned down, I should have taken a short term rental at that very moment because what ensued from that point forward could have given me gray hair if I didn’t already have some. I should take out stock in a hair coloring company because there’s a lot more now…6 months later.

For those of you who don’t know what knob and tube wiring is, it is an older form of electric wires that were in stalled in homes at the turn of the century through the 1940’s. Knob and tube wiring was a great system however it does not allow for a 3rd wire to act as a ground and is not compatible with modern lighting fixtures. We needed to replace all our lighting fixtures or have them re-wired. That was an expense we were not prepared to do since the wiring was expensive enough. This was a huge messy job however the relief to know it is done and we are no longer at risk of waking up to a fire, immense. The amount of holes necessary to make to pull the wires was up to 14 in one room. My house had more holes than Swiss cheese. What is amazing is that they did all this thorough relatively small holes and didn’t have to open up entire walls. Always hire a reputable electrician to do this type of work…this is not a Weekend Warrior Harry Homeowner type of job. It requires skill, knowledge and experience. If not removed properly, that’s when fires happen just to save a few bucks! 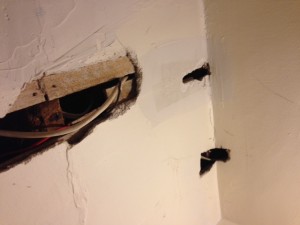 Holes for the wires to be pulled. 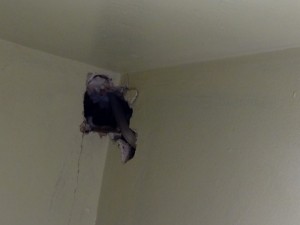 Fixing the holes and getting it back to normal was not as easy as expected. We interviewed 3 painting companies and went with the most expensive. You get what you pay for, right? WRONG, wrong and wrong again! Make sure the painters follow the sales pitch the company owner is actually pitching! We were not even going to paint 2 rooms and decided, we are doing everything else so why not and those were the rooms the painters started in. After trashing those 2 rooms with poor patching, not covering my couch to the point of having to discard it even though I asked 5 times and the workers being rude on top of it, they were dismissed never to return.

My second choice of painting companies came in, repaired the abysmal work the first company did and graciously did not charge us for the additional time required to correct the issue. They did an amazing job…and were respectful and professional. The way it should be!

Three months into all this, I have now moved my office to the top floor, which was not involved in the project. The paint smell and physical confusion of stuff everywhere or covered was reeking havoc with my personal equilibrium and I needed my own space. Thankfully I had a refuge and turned the top unused floor into usable space in about 2 hours. I could breathe again away from men roaming in and out of all the rooms. I couldn’t get to my bureau for about 2 weeks until I had a meltdown and demanded clean clothes…instantaneous action! 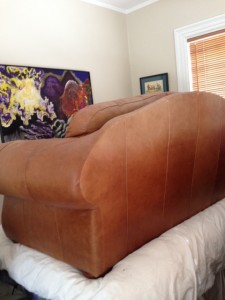 No place to put the couch in my son’s room except on his bed!

Well, the inside was done, couldn’t open the windows but done! Within a week all the touch up was completed, windows opened, house was cleaned and the painters started on the outside. I’m not sure which was in worse shape…the inside after all the wiring or the outside after not being painted for 16 years.

I was laying in bed in dreamland about 6:30AM and all of a sudden it sounded like thousands of screaming insects during mating season. The exterior of the house needed so much love, a double crew was assigned to the job. The intensity of 6 men scraping old paint at the same time was deafening and downright creepy! The dog was howling and going nuts! These painters were so thorough, they scraped down the bare wood. Now that’s impressive! 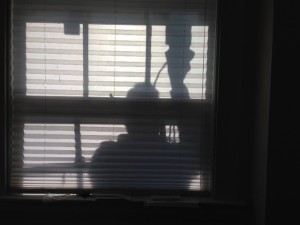 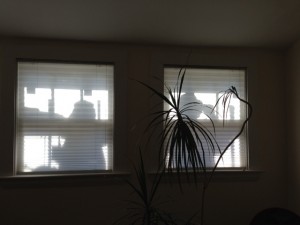 I went into the bathroom and there’s one painter right there at the window. OK, so I went to another bathroom and again, there’s another guy scraping away. I have 3 bathrooms in my large old house and the one without a window is on the top floor. I proceed to the top floor and my son is in the bathroom with my husband waiting outside for it next. He turned to me and smiled and said, “Get in line”. This went on for about 4 ½ weeks.At this stage, my husband was ready to tear out what remaining hair he has left! 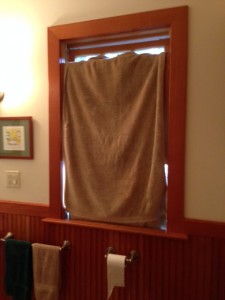 The moral of this story is this…it always takes longer to complete work and always costs more than expected…we all know this if we own a piece of real estate. Try to find out the full scope of a project before embarking on it because surprises always turn up and it can be significant both time wise and cost. If the scope of a project is immense, living in the house during the work can be tumultuous at best and dangerous. Consider taking a short term rental or squeeze in with a family member for a short time if possible. Trying to keep one’s sanity, especially if working from home during the process can be more a challenge than you are ready for. It was for me! 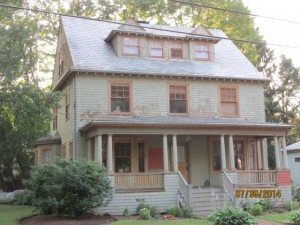 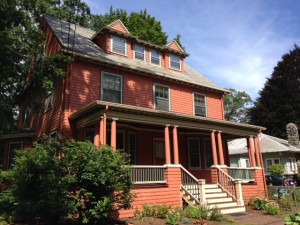