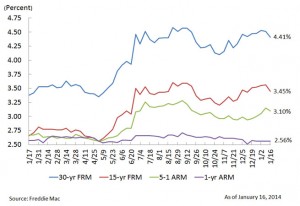 Average commitment rates should be reported along with average fees and points to reflect the total upfront cost of obtaining the mortgage. Visit the following links for the Regional and National Mortgage Rate Details and Definitions. Borrowers may still pay closing costs which are not included in the survey.

“Mortgage rates drifted downward this week amid signs of a weakening economic recovery. The economy added 74,000 jobs in December, less than the market consensus forecast. Retail sales [PDF]rose 0.2 percent in December, which was nearly half of November’s 0.4 percent increase. Meanwhile, the unemployment rate fell to 6.7 percent which was the lowest since October 2008.”

Freddie Mac was established by Congress in 1970 to provide liquidity, stability and affordability to the nation’s residential mortgage markets. Freddie Mac supports communities across the nation by providing mortgage capital to lenders. Today Freddie Mac is making home possible for one in four home borrowers and is one of the largest sources of financing for multifamily housing. For more information please visit www.FreddieMac.com and Twitter: @FreddieMac.

The financial and other information contained in the documents that may be accessed on this page speaks only as of the date of those documents. The information could be out of date and no longer accurate. Freddie Mac does not undertake an obligation, and disclaims any duty, to update any of the information in those documents. Freddie Mac’s future performance, including financial performance, is subject to various risks and uncertainties that could cause actual results to differ materially from expectations. The factors that could affect the company’s future results are discussed more fully in our reports filed with the SEC.