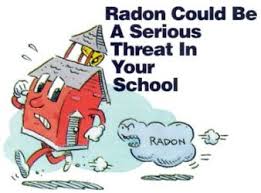 They didn’t know it at this high school but every time a student entered this storage area, they were walking into danger. Just from the graffiti, you can see kids hang out here-it’s even where they keep the props for their school plays, but the air in here is toxic – tainted with the deadly gas radon!

School officials had no idea there was a problem, until we suggested they test for the gas that’s so dangerous experts call it the silent killer.

Steve Bergholm, Newburyport School System Facilities Manager: “Health and safety of our students and faculty is a priority, so when we find a problem we want to take care of it.”

Radon is a leading cause of lung cancer, second only to cigarettes. You can’t know it’s there–unless you test by taking air samples. And when you get the results back, any radon level over a 4 is dangerous. The equivalent of smoking half a pack of cigarettes a day. In this room at Newburyport High the radon level WAS 28.

Hank: “That’s seven times higher than it should be!”

The school is working right now to make this place safer. But kids in many other Massachusetts schools could still be at risk. Radon forms underground from certain decaying rocks and seeps indoors through building foundations.

In Rhode Island and Connecticut the law requires schools be tested for radon but not Massachusetts. That’s especially troubling because these Massachusetts counties: Essex, Middlesex and Worcester – are a radon “hot zone.” The combination of rocks and soil means the threat here is the highest.

We called dozens of school districts in the hot zone and look at this list, every one of these communities told us they have never tested schools for radon. Never.
Eric Conti, Burlington Public Schools Superintendent: “I know very little about radon. If there’s a need we’ll certainly test.”

We offered many of the hot zone schools free radon testing. Newburyport paid for their own but only one school – Clinton – took us up on our offer! They found no problems.

But every other school official we talked to refused. Some actually telling us: “If there’s a finding… then parents are gonna go nuts.” “People panic, and I don’t want that.”

Six years ago, the Massachusetts department of public health offered the same thing we did, free radon testing for schools. Only five districts in the state accepted that offer. And three of them found dangerously high levels of radon!

In South Grafton Elementary, classrooms measured up to 17.3 At Horace Mann Elementary in Newton tests revealed rooms with levels as high as 39. In Worcester schools – radon levels as high as 120. that The radon was discovered several years ago–and officials insist all the schools are now safe. But parents we talked to were still concerned.

And that same danger could still be lurking in your child’s classroom.

Was your child’s school ever checked for radon? Your school superintendent should know that–and should tell you the results. And if it hasn’t bee, you should know the Department of Public Health’s offer for free testing still stands. In the newsroom, I’m Hank Philippi Ryan.