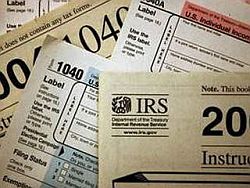 “The only difference between a tax man and a taxidermist is that the taxidermist leaves the skin.     Mark Twain

It’s tax season, and many Americans are determining whether to file early, file on the April 15 deadline, or file late.

If you request an automatic extension, you will have to pay any tax you owe in April, but the final return would not have to be filed until October 15.

Regardless of when you decide to file, you should start preparing now. Every year, the Internal Revenue Service circulates a large publication, entitled “1040 Instructions” which is available on its Web site. According to the IRS, the average time required to complete and file Form 1040 (the most commonly used income tax return form) is 15 hours. The bulk of this time – eight hours – involves only record keeping; tax planning accounts for two hours, completion of the form and submission another four hours, and one hour for miscellaneous.

You should have received statements from your employer and lender at the end of January. By law, any lender (private or commercial) that receives $600 or more in mortgage interest must send the borrower Form 1098. Although in recent years, most consumers were not paying points to buy down a mortgage loan, any points that were paid must also be listed on this form. The form will also include any mortgage insurance premiums that were paid last year.

If you paid such insurance premiums on policies issued on or after Jan. 1, 2007, and if the policy was for “aquisition debt” – which refers to a home that you purchased or substantially improved – those payments may be deductible on your 2013 tax return. Unfortunately, this was one of the many tax benefits that Congress did not extend for this year.

When you get Form 1098, don’t just put it in your tax file. Review it carefully, since the same information has been transmitted to the IRS. Get an amortization table – available on the Internet or in local bookstores – and make sure that all of your payments have been properly credited. This is especially important for those of you who have been making extra principal payments over the years, so as to reduce your loan obligation as quickly as possible.

And if you bought or refinanced a house (including a condominium or a cooperative apartment) last year, there may be real estate tax adjustments or interest payments reflected on the HUD-1 settlement statement which may not be included in the1098 form.

Every year, there is always something new in the tax law. Sometimes, it will cost you more money. For example, beginning in 2013, a 0.9 percent Medicare tax may be imposed, depending on your income.

But you may also get a tax benefit. If you have a same-sex spouse whom you legally married in a state (or even a foreign country) that recognizes same-sex marriage, you and your spouse generally can use the married filing jointly or married filing separately on your 2013 return. According to the IRS, this is true even if you and your spouse now live in a state that does not recognized such marriages.

I am always asked – especially by homeowners who for the first time will be able to itemize their tax deductions – what’s the best way to start. My suggestion: Go to the IRS Web site, and download a number of its helpful publications.

Recently, the IRS announced that it has significantly updated “Your Federal Income Tax” forms. According to the IRS,Publication 17 includes important changes to help taxpayers “get the most out of various tax benefits and get a jump on preparing their 2013 federal income tax returns.” This 292-page guide contains thousands of interactive links to help taxpayers quickly get answers to their questions.

Additionally, you can obtain free help with problems you cannot resolve on your own by contacting the IRS Taxpayer Advocate Service. According to the IRS, there are offices in every state as well as in the District. For more information, Click Here.

Finally, beware of scam e-mails or phone calls. The IRS periodically issues a warning not to provide any personal and financial information – such as name, Social Security number, bank account and credit card or even PIN numbers – to anyone calling or e-mailing claiming to represent the IRS.

The IRS makes it very clear: It does not send taxpayers e-mails about their accounts. And the only way to get a tax refund or to arrange for a direct deposit is to file a tax return. For more information, see “Suspicious e-mails and identity theft” on the IRS Web site.