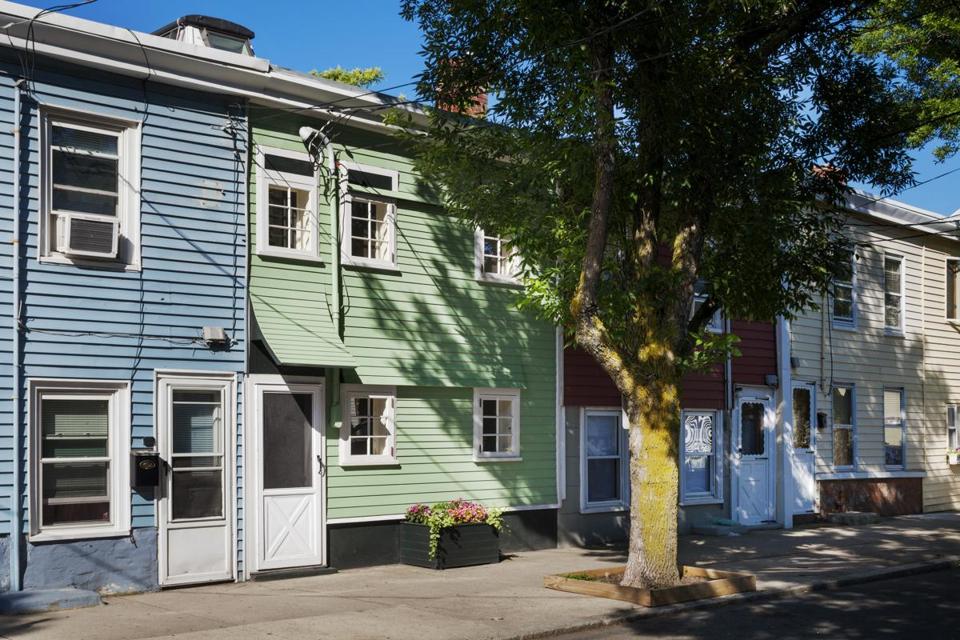 The row house architect Lyle Bradley renovated in East Boston is painted a cheery green. The casement windows are recycled double-hung sashes turned on their sides.

DESIGN PHILOSOPHY: Honor the spirit of the place and the materials I work with to create a well-crafted and thoughtful design.

Shortly after a newly minted architect purchased a small row house in East Boston, neighbors on his street of modest two-story homes began bringing him food. The architect, Lyle Bradley, was living in the house while demolishing its innards and had no kitchen, so bowls of pasta and gravy (Eastie vernacular for sauce) were especially appreciated. That spirit of welcome continues to be sustaining now that Bradley, his wife, and their young daughter are firmly settled in this neighborhood of Boston across the harbor from the city’s center.

Inside, the living/ dining/kitchen space is part of the first-floor open plan. Bradley enters from an enclosed porch/mini-greenhouse at the back of the house.

It was 2005, and Bradley, a native of Milton, Massachusetts, had just finished architecture school at Washington University in St. Louis, Missouri. He had started work in downtown Boston with Albert, Righter & Tittmann Architects Inc. and was not so much interested in being an urban pioneer as in finding a home he could afford. “I bought one of the cheapest houses on the market in one of the least developed areas of the city,” he says. Idealistic and energetic, Bradley was “eager to get my hands dirty and have some real architectural experience.” He says that “building makes you humble,” but he has no regrets over his “labor of love.”

His wife, Kara Lashley, a financial editor and transplant from Washington state, joined with him knocking out walls, planting vegetables, and planning the most efficient way to live in 800 square feet. “You have to run a tight ship,” she says of making a small space work. “You have to be disciplined, organized, and have a lot of built-in storage.” 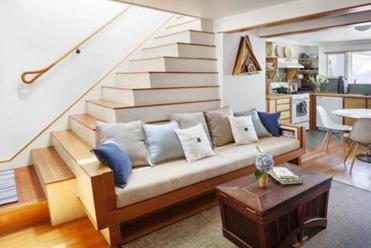 Before architecture school, Bradley had worked as a carpenter and had taken a three-month course at the Center for Furniture Craftsmanship in Rockport, Maine. So he was absolutely fearless about designing and crafting cabinets, desks, stair railings, and even a sofa in his Eastie makeover. Much of the work was done in the 100-square-foot shed he built in the backyard. But a lot of the interior was the result of assiduous recycling. The 1970s butcher-block kitchen counter, for example, came from his mother’s house; he flipped it over and refinished it. The “picture window” overlooking the garden is a glass door turned on its side. There is only one window in the entire house that is not salvaged from an old house or a contractor’s dumpster. Most of the materials were free, and, as Lashley can attest, so was the labor.

The stock stair railing with the whimsical addition of a sea serpent’s tail at the end and the bowed shiplap wall flanking the stairs (a nod to East Boston’s shipbuilding heritage) demonstrate Bradley’s expressive sensitivity and woodworking skill. The side of the staircase functions as the seat back for the built-in sofa, one lower stair purposely extended to serve as an armrest. While such clever touches abound, the biggest challenge was reshaping the 25-foot-long-by-15-foot-wide house for practical living. As Bradley recalls, “The existing layout was terrible: The stairway cut the house in half, and upstairs you had to go through a tiny bedroom to get to the bathroom.” So he moved the stairs to a party wall, opened up the ground floor from front to back, and rearranged the bathroom and two upstairs rooms into more usable spaces. A skylight in the bathroom and a cupola over the stairwell bring in lots of light.

No matter how ingenious the storage solutions, there simply is not a lot of living space for Lashley, Bradley, their year-old daughter, Lily, and Corrina the cat. So the thousand-square-foot backyard is the family’s demesne. All the materials here — such as the bluestones that form the patio — are also builder discards. Lashley comes from a family of gardeners, and she and Bradley managed to create gardens of flowers and a surprising abundance of vegetables in five raised beds that ultimately won the 2013 Best Small Garden award in the City of Boston’s Mayor’s Garden Contest.

Four years ago, an elderly Italian neighbor gave the family an apricot pit and suggested they plant it in their garden. The seed has become a 10-foot-tall tree that finally bore some apricots last summer. A producing fruit tree in the heart of the city is the perfect metaphor for this family’s commitment to East Boston and an ideal symbol of the inevitable renaissance of their community.